What place would I choose to celebrate Independence?

Both, Belarus and USA, celebrate their Independence in summer, only a day apart. Guess who from British and who from Germans? Each for different reasons though, and if only history taught us anything. So I decided to have an independence celebration of my own, and couldn’t think of a better and a more appropriate place to do it, than the City of Lions.

How do I begin writing about the city where my instant feeling was “love it here”? And many thoughts on my mind from “for how long can I extend my trip” to furthermore, even thinking about weekly/monthly apartment rentals? Having no expectations whatsoever from the very beginning, definitely made all the difference for me. Or, may be, as a self-proclaimed “blissful lion cub” traveling the world, it felt like arriving home, figuratively and emotionally speaking.

After all, this is the City of Lions…

Just as the city’s founder Danylo Halytsky, I traveled through these lands for a few days, however, was so impressed by them and liked the city so much that I stayed even longer, and no wonder why. Influenced by many cultures through centuries, it is not a surprise that the city has quite a particular and charming vibe of its own. Because of its unique geographic location, at the crossing of the European medieval trade routes, it was the intersection of different cultures, languages and ideas, the It place for an exchange of luxurious goods and valuables, which in turn transformed it into one of the most prominent and remarkable cities of its time. In fact, it was so meaningful and important, that it was the only Eastern European city present on French maps in the early 15th century.

Nowadays, the city center, or the Old Lviv, is a very well-preserved UNESCO World Heritage site, and the city itself happens to be one of the main cultural centers of Ukraine. Being a part of many countries and a particular combination of cultures turned it into an artistic, architectural and cultural modern urban gem. Into the city, which sometimes is being referred to as “little Paris”, but I would certainly refrain from this kind of comparison, this city definitely earned its independent status and every right to be unique in its own way.

Surprised with pretty much everything (in a positive way!): it’s historic and cultural city center, amazing food scene (I guess not so many places in the world could convince me to go vegan!), and over all authentic, unpretentious, cheerful and relaxed atmosphere, I let the city reveal itself to me in its own way, while wondering among its many charming streets, interacting with it, discovering its unique peculiarities and enjoying every second of it. 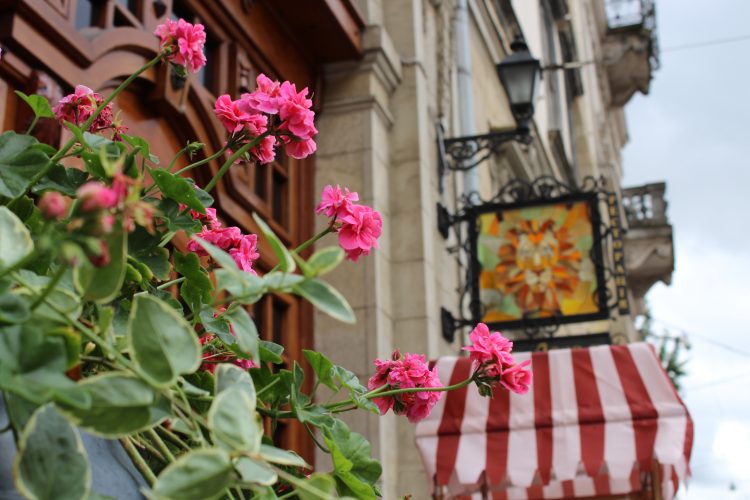 Love it here! Greetings from Lviv! ☀🌺

Apparently, Lviv is for romantics at heart! And I did fall in love, with Lviv though ) 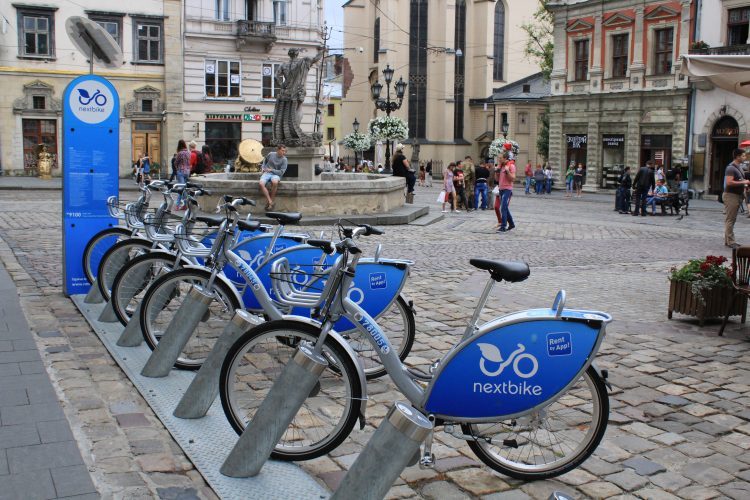 How is this for an option? 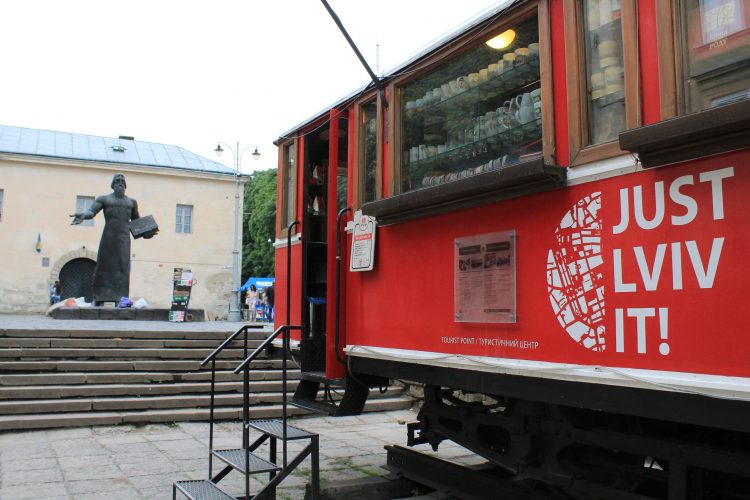 Just Lviv it! Sounds like a great idea to me ) 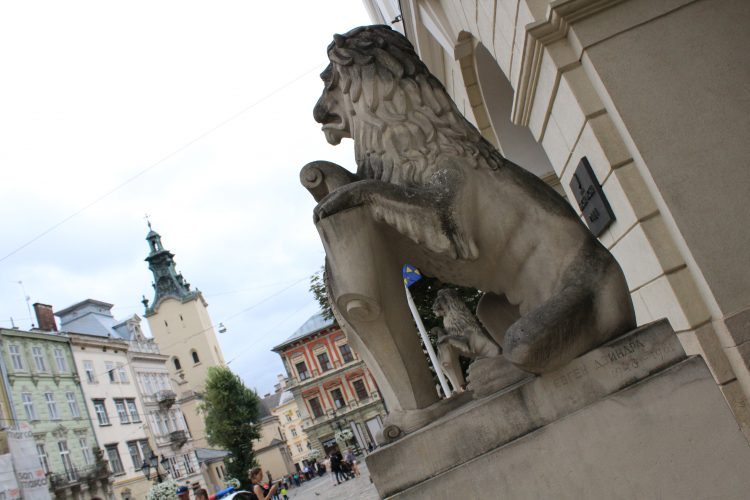 What is there in abundance in Leopolis, or the City of the Lion? Surprise, surprise… Lions!  While the city itself was named in honor of original Lion, Lev, the first son of King Danylo Halytsky, and was a wedding present to his son and his bride. While this Lion seems to be quite important also, it is next to the entrance of the City Hall 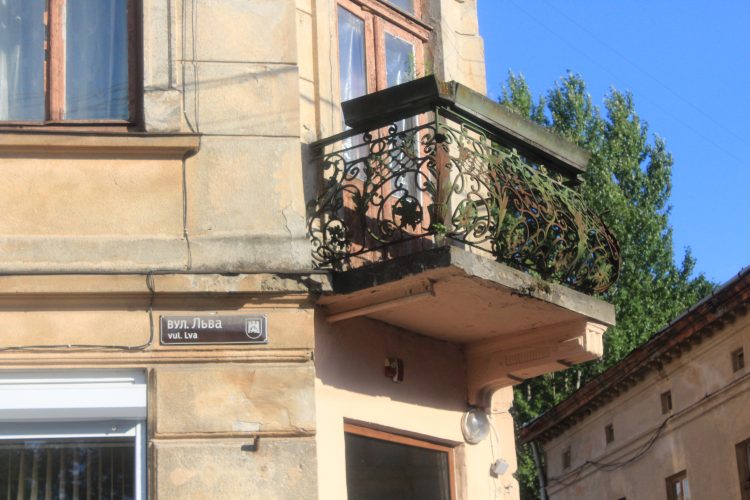 And there is even the whole Lion Street! 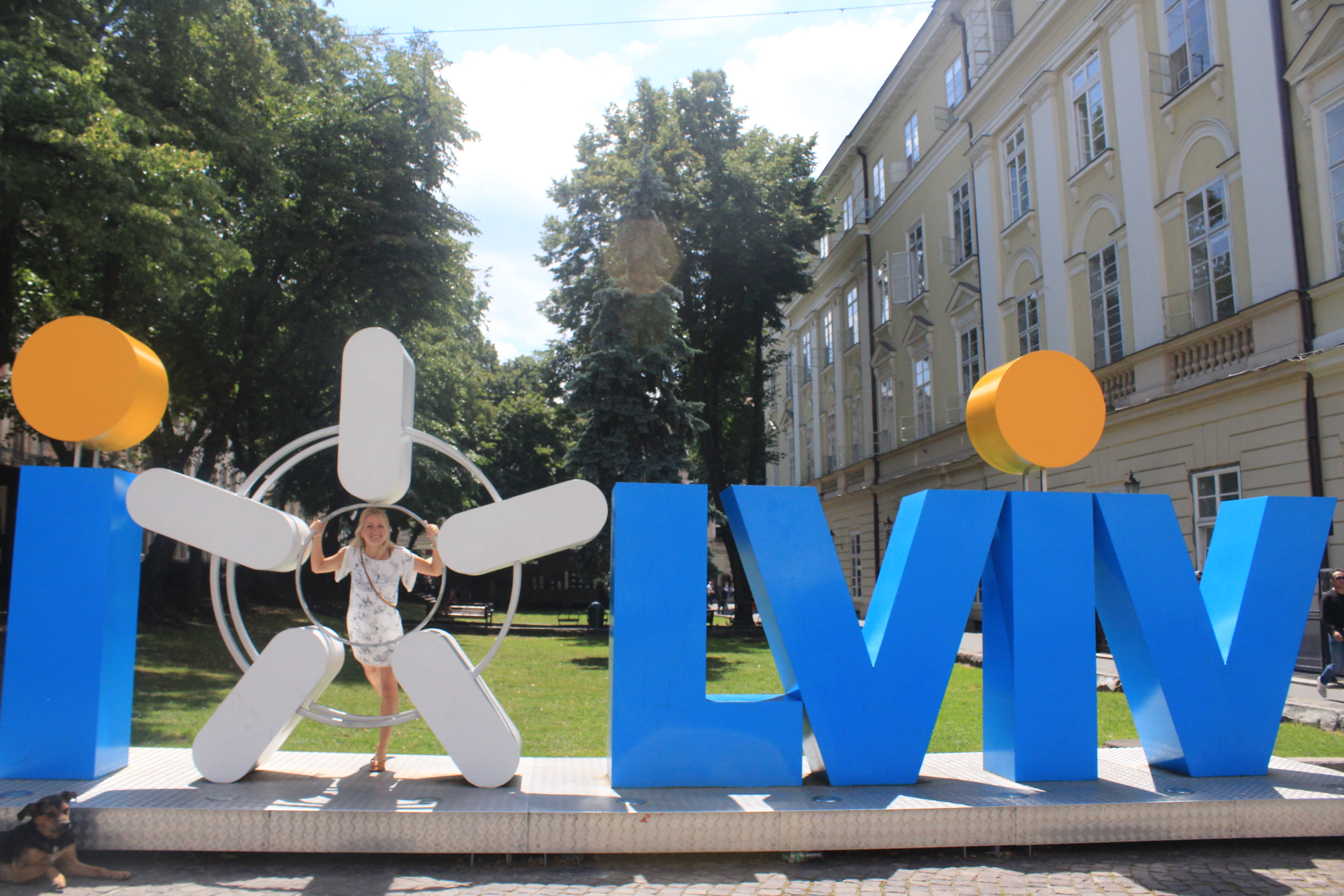 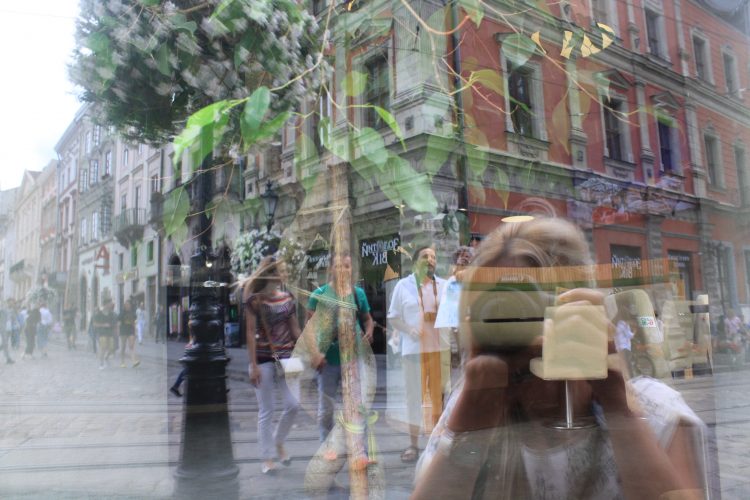 For many travelers exploration of Lviv begins from Rynok Square, or the Main Plaza and the center of it all, with buildings alla Italian Renaissance, City Hall and its many museums, restaurants, specialty food cafes, gift shops and boutiques 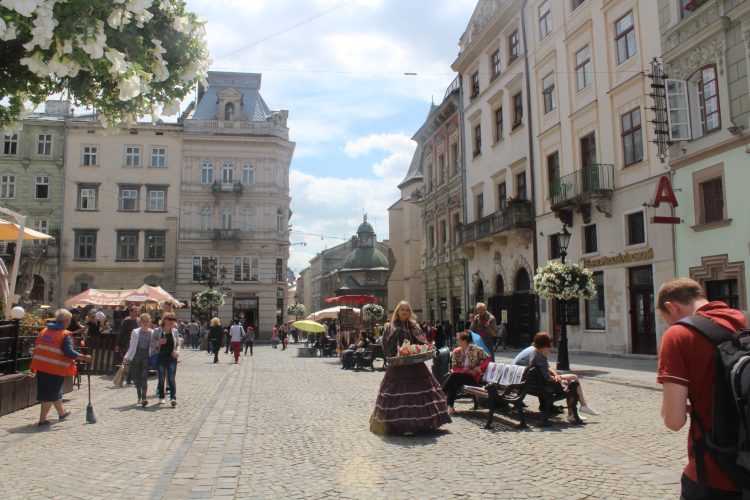 “In this city, like in the Market of Venice, you can meet people from all over the world in their national clothing: Cossacks in large furry hats, Russians in white hats, Turks in white turbans, Germans, Italians, Spaniards in short clothes. Whatever language you speak, you’ll find it here. The city lies far from the sea, but when you see a crowd of Cretans, Turks, Greeks and Italians gathered around barrels of malmsey in Rynok Square, still dressed for sea voyage, you might think that there’s a port right outside the city gates”, about Lviv in 1606. 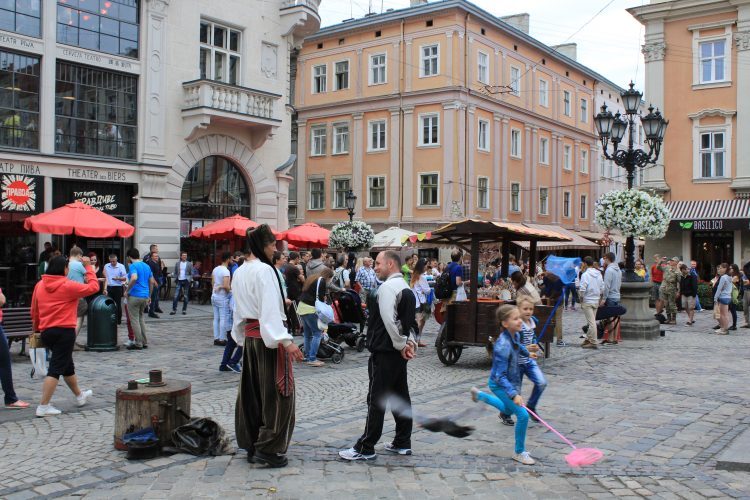 Which seems to be true even today 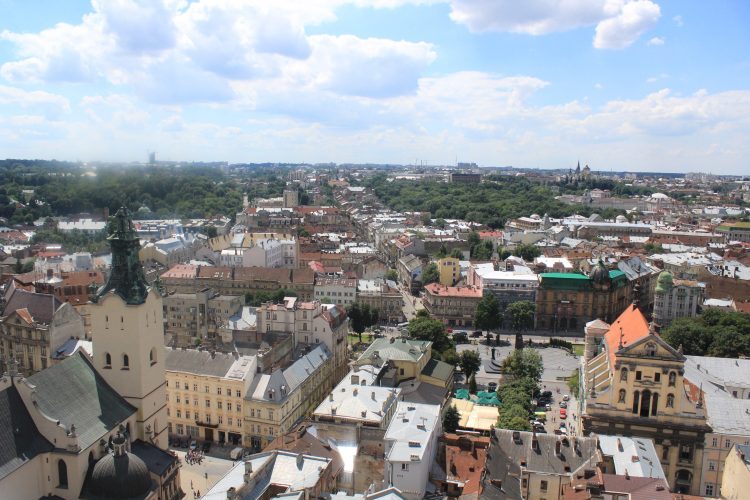 And if you are brave enough to take those stairs, since there is no elevator here, this is city center from the top of Lviv City Hall 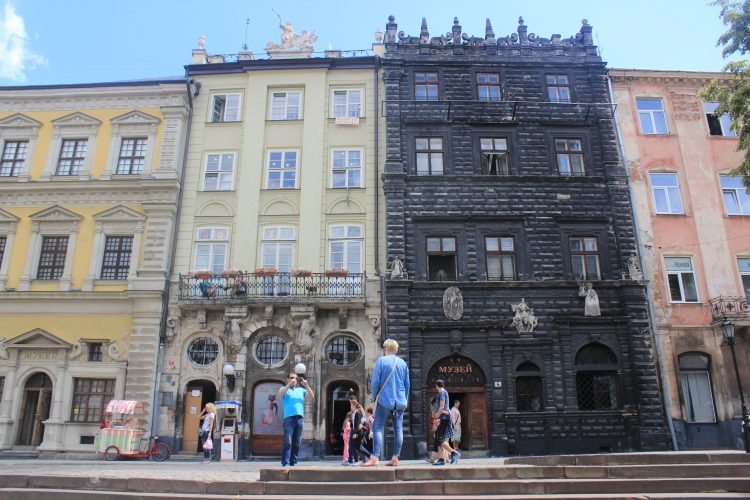 With abundance of city museums, Kornyakt Palace or the Royal Palace, constructed alla Italian Renaissance style, was the residence of the wealthiest man in the history of Lviv. Nowadays, this is Lviv History Museum you can visit, with a very charming Italian courtyard inside 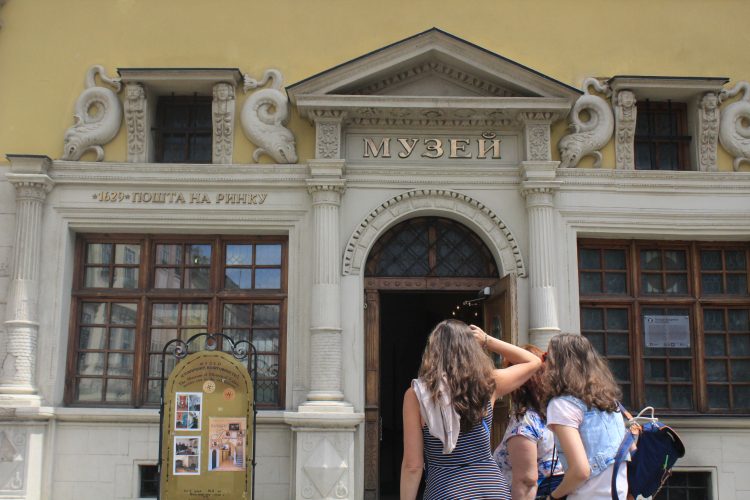 One museum will be enough for me… 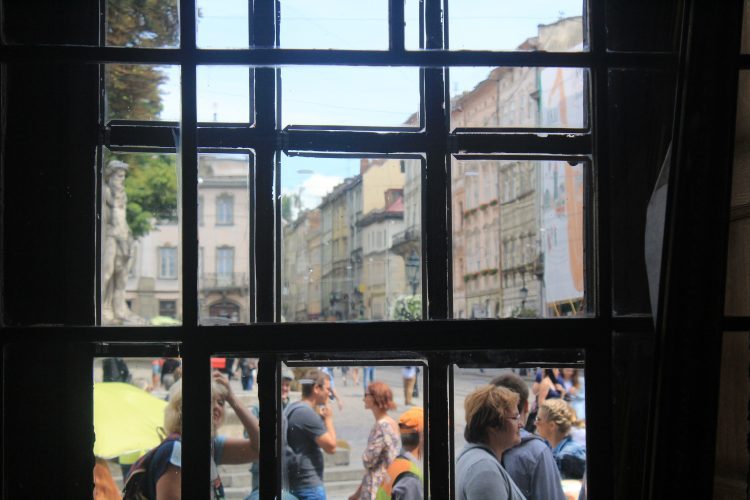 and off to enjoy Lviv in real time, especially in a place like this 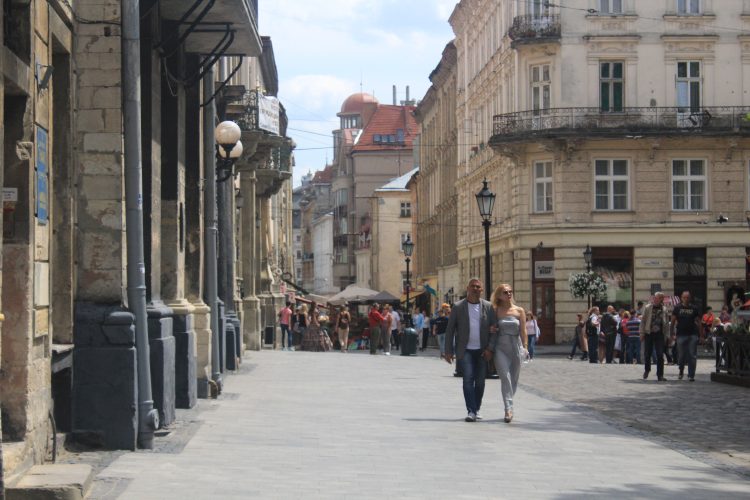 Besides Main Plaza and City Hall, there is so much more to Lviv 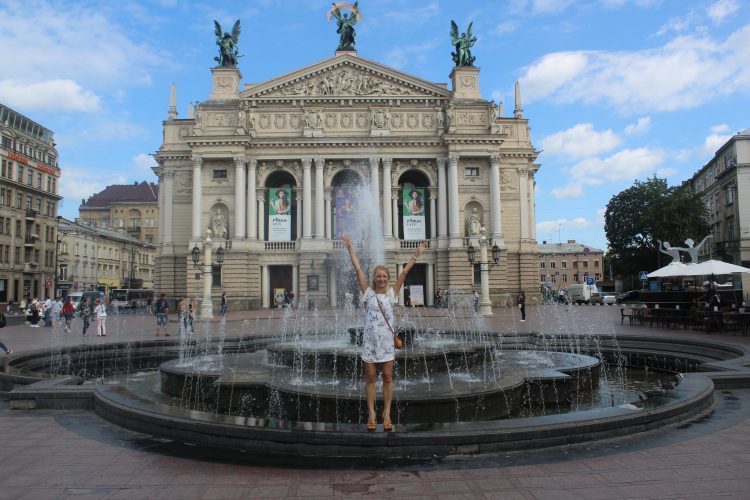 With quite a few theaters in the area, Lviv Opera House is an architectural and cultural gem of the city 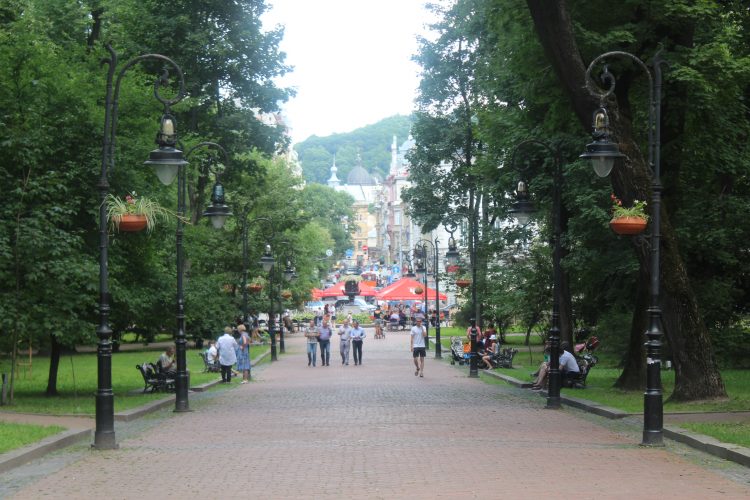 And quite a few city parks 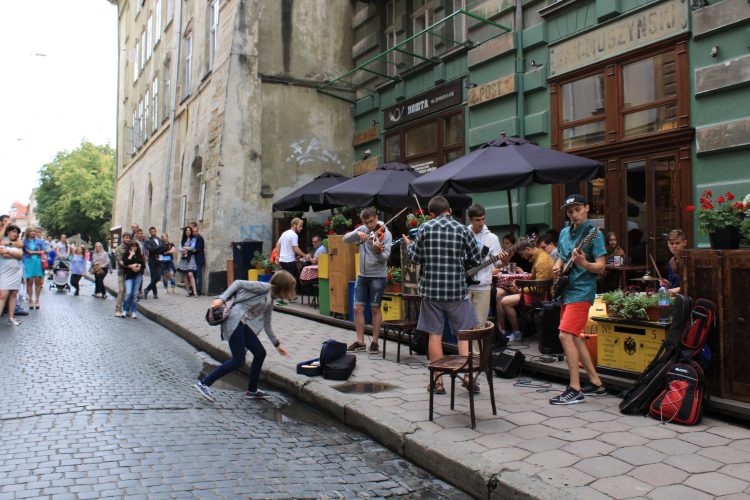 And street music as diverse as can be 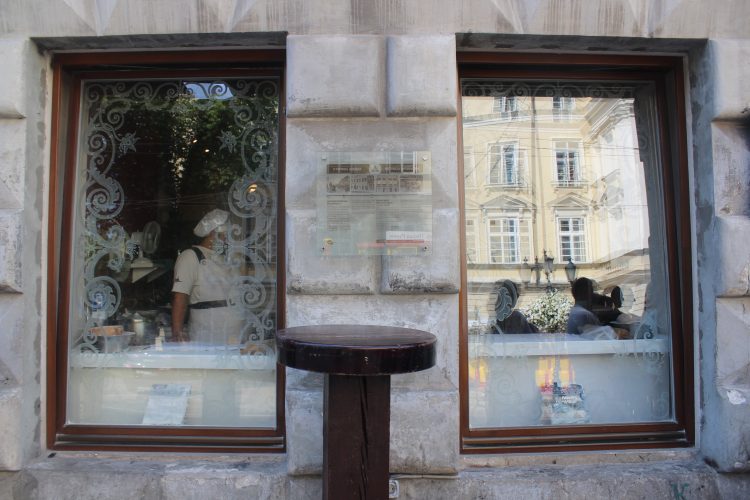 And many specialty food cafes and shops, where you get to see food production process, from coffee, chocolate, candy, pastry and more 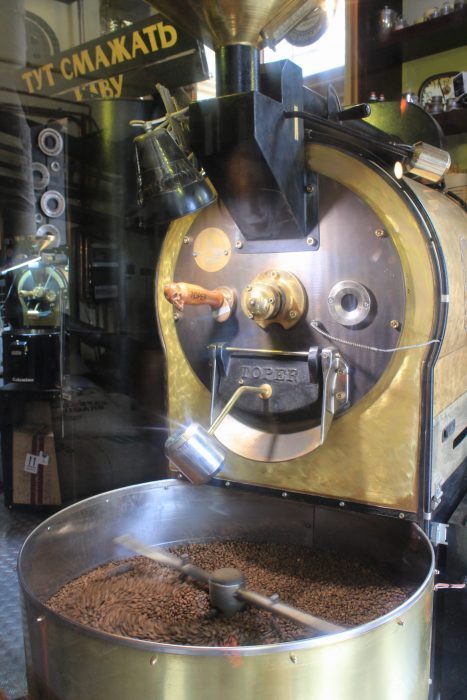 Did I mention coffee?! There are a few of them in Lviv, and a lighter roast seems to be it around here. I might not like it that much, but hey, as long as it is real and made to perfection 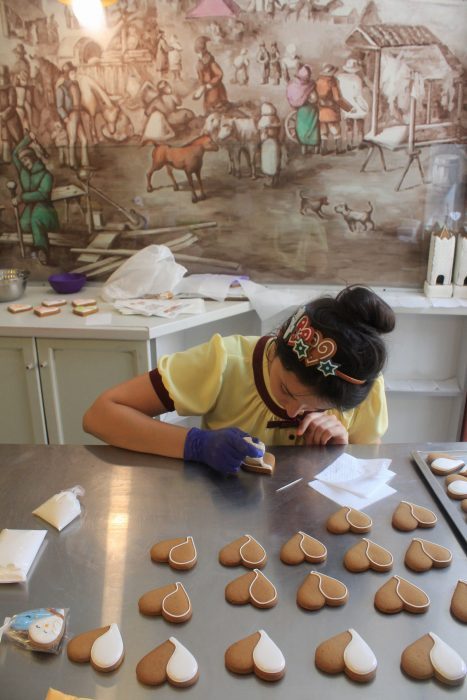 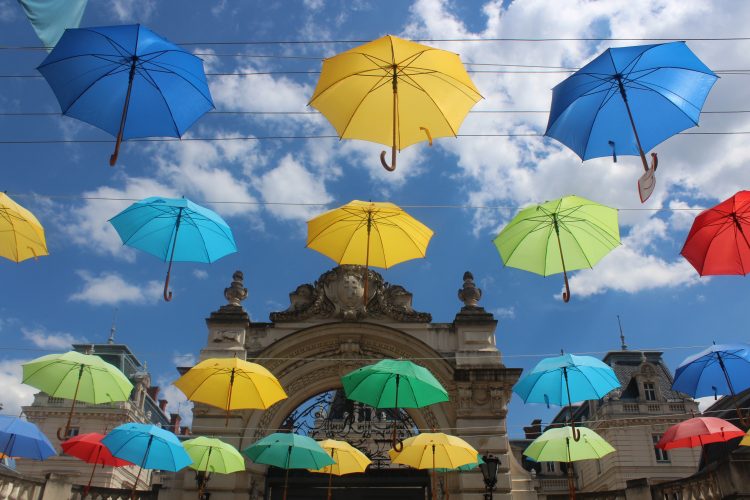 And positive surprises like these… I think I am all set ) 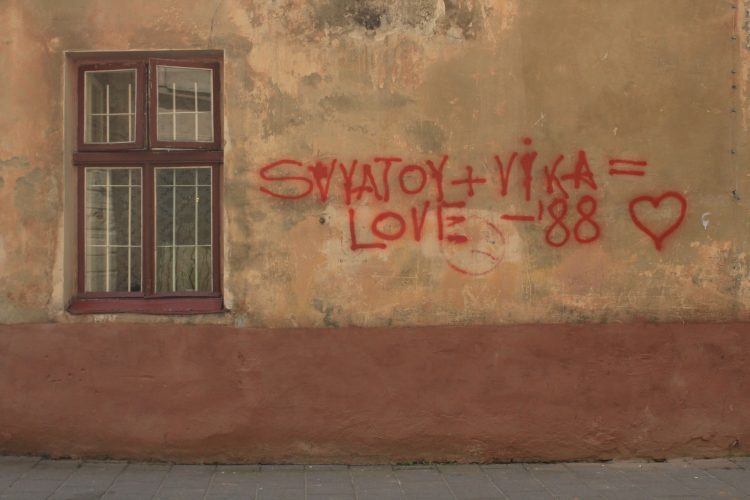 And Love… Must be those romantics at heart 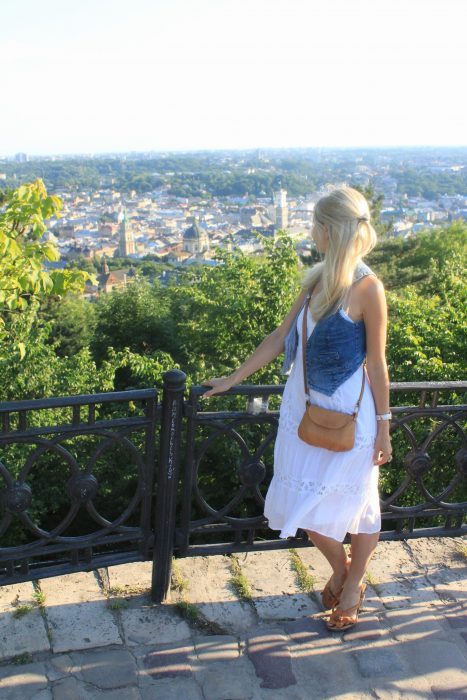 If you still didn’t get it… the City of Lions is very much about Liberty and Independence, with its abundance of roaring Lions, historic and cultural city center, relaxed atmosphere, that even Hakuna Matata 🎶 comes to mind, impressive mix and influence of diverse cultures and languages, complemented with architecture, talent, music, romance, nature, vegetarian bliss (at least for me!) and particular unique charm…. 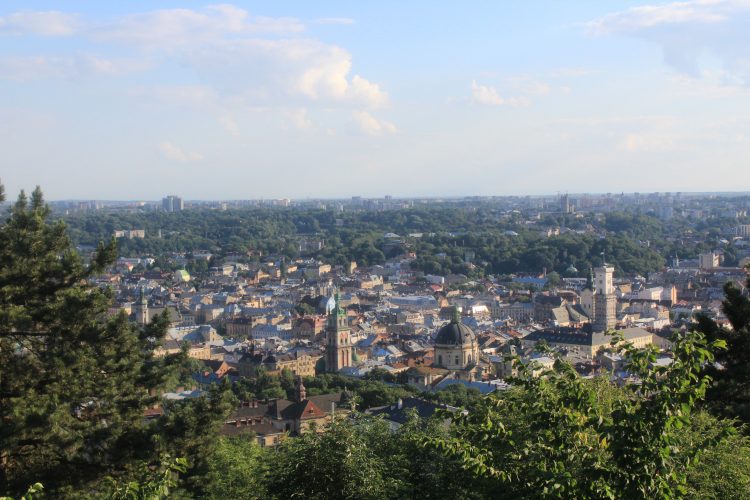 besides getting to the top of City Hall, visit High Castle, or the ruins of the old castle, with impressive views of Lviv as far as eyes can see…. What roars and manifests Independence and Liberty more than this?! Probably, just this 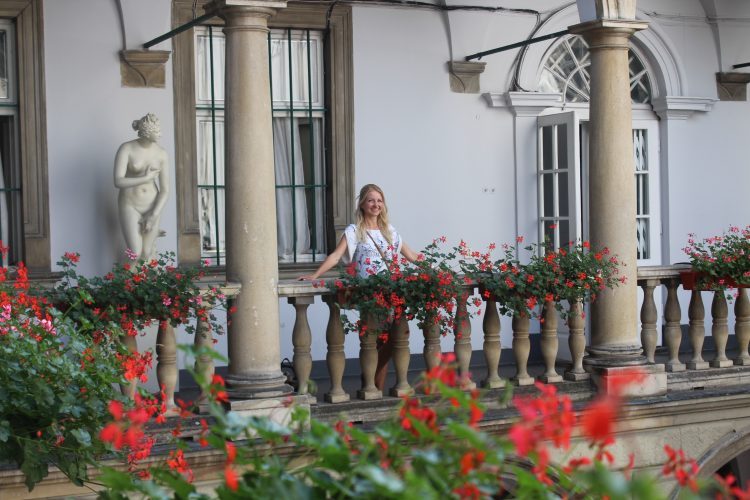 You know when you know…

when started listening while someone was speaking about apartment rentals in Lviv 😄  wondered what it is like to live here long-term 😄  almost late for my bus was secretly so content I was already planning my next few days in the city 😄 I guess, thanks for all the amazing and blissful experiences and see you again soon, Lviv 🌺

Have you heard about the City of Lions?